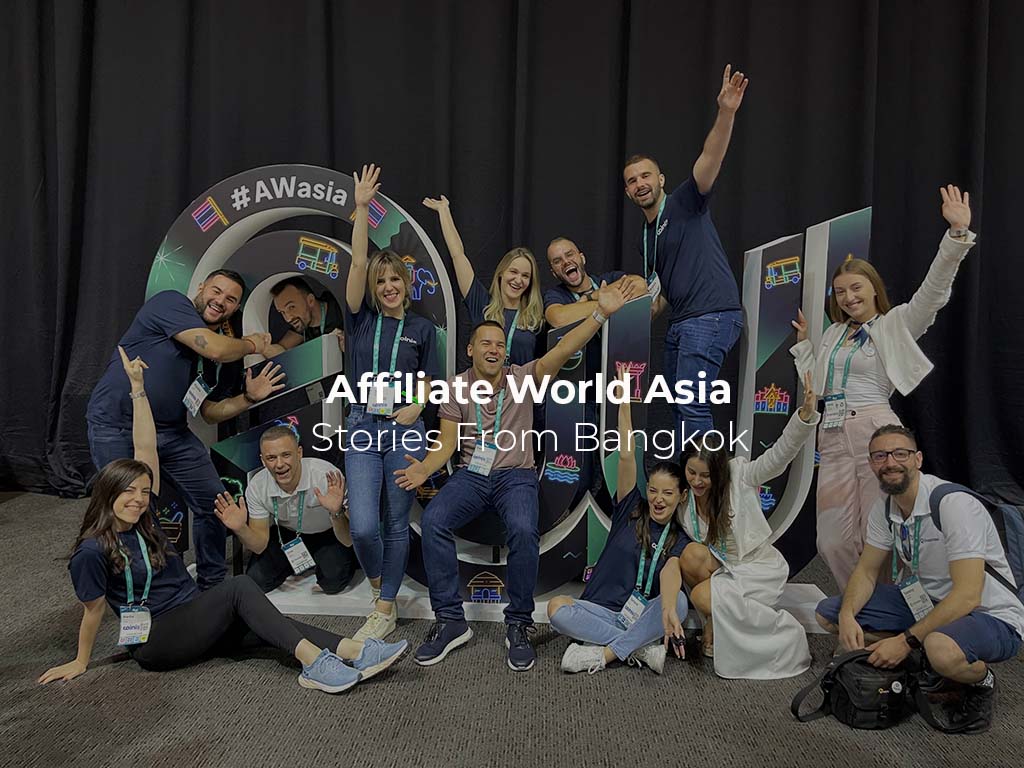 Three long years have passed, and finally,  AFFILIATE WORLD ASIA 2022 is back in Bangkok, Thailand. No way we could have missed it! Alongside 5 thousand attendees from 116 countries.

At this point, there is no need for a long intro, just a reminder that Affiliate World Conferences are the biggest offline event for affiliate marketers and entrepreneurs. And as the end of the year approaches, everyone starts packing summer clothes and preparing pitches for its Asian edition in Bangkok.

Now, as the event is over and I’m sipping warm tea at close to 0 temperatures, I’m trying to describe the last week in a couple of sentences.

With all that happened, that seems impossible, so stick with me for the next couple of minutes as I take you through our Bangkok experience.

After a bit of overthinking about forgetting important things, missing the flight, and other typical pre-travel stuff, we boarded the plane, ready for a long nap.

And after about ten hours, we were in the other part of the world, with 30 degrees higher temperature, ready to take the best from Bangkok and the Affiliate World Asia conference.

So, let me go straight to the point.

Just moments before I started writing this, we drew the comparison to conferences in Dubai and Barcelona, figuring out why this one was so different. Both of those were amazing, but this one blew us off!

The people from AWA have outperformed themselves! I can only imagine what the Affiliate World team is preparing for 2023.

I’ll start with the venue – Grand Centara Hotel was a fantastic choice for a conference this size. It also provided accommodation options for the delegates, which was super convenient. And the main networking event took place just one floor above the venue, which was very convenient. You could continue networking right after the official part of day one. But more on the event is below.

One thing that keeps us excited after the conferences is the people we meet; this time, it happened again! We met so many brilliant people from the industry. Some extraordinary people gave speeches that were hard to miss – we got some new ideas about the art of user acquisition with the changes in the landing pages, the ultimate TikTok funnel framework, the state of SEO in 2022, top hacks for affiliates, and many more.

And even with all the speeches we listened to; we managed to greet so many of our friends that came to say hi.

It was great to see many familiar faces and catch up about business and non-business-related things in person. Who would have thought that so many things could change in just a couple of months?

Actually, many things did change for us too.

Our Advertiser platform was a hit – so many people wanted to learn about it – from smaller, independent advertisers to large companies. It seems like the quality of push traffic we are offering on it has become the topic of talk in the affiliate circles. And it’s for a reason. A combination of huge amounts of traffic, quality platform, and the support our advertisers get from the team. 💪

Oh, and the 15% sign-up bonus for everyone that registers on the platform! (If you stopped by, you’re still not late to claim it.)

The search team didn’t stop talking with the existing and potential partners about the monetization of their digital assets. I cannot even count the number of publishers that came to ask about our solutions for publishers, affiliate programs they could join through our platform, and the monetization possibilities they have with us.

A sea of marketers flowed effortlessly between the stages and the booths, and our booth near the main stage was so crowded at all times because of that – one of the things that thrilled us!

Ok, time to stop bragging. Actually, not yet – did I mention that we had a giveaway organized at our booth?

People who stopped by our booth had the chance to win the following:

Just by leaving their business cards in the box. The prize draw was held by the end of day 3, and we’re super happy for the winners!

We had a couple of fantastic social events to remember during these days in Bangkok!

As usually happens at AW conferences, you don’t have the luxury of sleeping much if you want to experience it all. This time again, we gave sleep up. And looking back on this point, the decision was the right one!

Day 1 of the conference was great but exhausting, and luckily, we only had to go one floor up in order to get to the venue of the official AWA event. And everyone else was there, still mingling and talking business but with a much-needed cocktail in their hands.

Enthusiastic as we are, we also took a part in a flip-cup tournament against other companies from the industry. I will not elaborate more on it since we (graciously) lost. But here’s a photo, so you get the vibe.

A plan for day 1 was also to catch up with our colleagues with Propeller Ads, and we spent a great evening at the event they organized. There was a karaoke room at the venue as well, and we didn’t shy away from the mic!

And the evening didn’t end there – we simply HAD to see what else the nightlife in Bangkok has to offer!

The unofficial part of day 2 of the conference was equally interesting as the first one. This time we went for a VIP meetup
organized by our friends from Voluum. We got what we expected – great networking with top industry players while enjoying amazing drinks and delicious food. And a stunning view over Bangkok.

And after that, another party was organized by Affiliate Business Club. Surprisingly, everyone was still energetic and ready to party! And yet another evening went by so great!

The official part of the conference was already done, but the events for us were not! We were going to end the Conference on a high note with Affiliate Space Awards 2022 edition. The event was a Gala Dinner with a spectacular show, where the top of the top best companies from the affiliate space were announced. From leading influencers to newcomers, people from the industry got to choose the best ones.

Coinis got the People’s Choice Award! Look how happy we were about it!

It was a memorable closing night, for sure.

Bangkok is a very large city known for ornate shrines and vibrant street life, and it has a lot to offer. There are plenty of things to do in Bangkok all day long. From temples to skyscrapers, shopping malls, and street food, we had so much fun exploring it all.

We visited the Grand Palace, Bangkok’s most famous landmark. The beauty and grandeur of the place stunned us! Couldn’t have missed the charms of its floating markets and the fresh and tasting authentic products from them. We took some of them home for our friends and families to have a part of the experience.

We enjoyed the vibes of Chinatown, the story of Jim Thompson and the silk industry, and tried so many Thai delicacies. And intended to do much more if we only had the time.

But it was time to go back home.

If you’re anything like us, you took the best out of the conference – we did some great business, had so much fun, and learned a couple of new skills along the way.

Now, as we’re back, there are a bunch of great stories we can’t wait to share. And we spread them in the breaks of following up on our new leads, reminding them of the topics we covered during the conference, and devising the next steps.

The first weeks after the conference are the most critical time to establish a connection and start building trust with our new partners, and we are enjoying it (almost) as much as the conference itself! So, if you’d like to talk business with us but didn’t manage to catch us at the conference – now is the time!

After a year full of fruitful conferences and business success that followed, it’s hard not to be proud of everything we’ve done.

A passionate marketer with a love for copywriting. Currently on a quest of understanding the affiliate ecosystem in-depth, from both publishers' and advertisers' side.