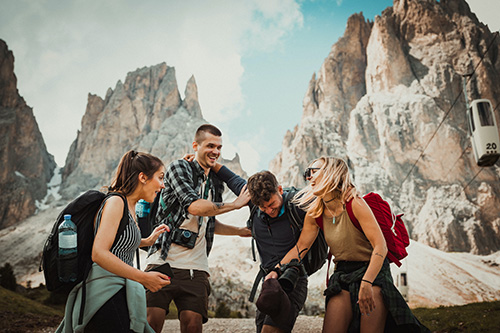 Considering how hectic and catastrophic this year was – with the pandemic, Australian bushfires, Prince Harry and Meghan Markle stepping down from the throne, and many more tragic happenings, we have decided that we needed some space to clear our thoughts. Therefore, we have made a rational decision of packing our bags and going on a semi-vacation.

Before you dig into this post, here is the Trailer of Hollywood’s most exciting upcoming movie: Coinis Team Building 2020 😂

The idea was to enjoy Montenegro, as in the time of writing, we had 0 COVID-19 cases. We missed each other due to remote work and not able to hug each other, so we decided to organize an activity where we will practice the total OPPOSITE to social distancing.

Sincerely hoping this chaos will end soon, we flipped the coin and started this change with a great team-building – where we created a lot of memories and stories to tell over and over. First off, let’s bomb you with these great photos from our drone. We are born movie stars.

The Blue Cave and the Golden Rock

Our primal trip location was Boka Bay – also known as The Pearl of the Mediterranean sea because of its astonishing beauty. First on the itinerary was the speedboat trip around the bay, where we visited its crown jewels – the Lady of the Rocks church, Mamula island, and the Blue Cave.

We visited the most beautiful fishing villages, historical monuments, and churches, not to mention the beautiful bay and the seascape surrounding. Every part of the boat trip was rich with the history of Boka Bay, and we learned a lot during this sea trip.

The whole experience lasted for more than 3 hours, although it was a 3-hour tour altogether. And while you are enjoying these pics, you are asking yourself – how can I book this, right? Well, easy – Montenegro Submarine is open for all, and there are many options. Check it out, and if you do get your tour booked, let us know how that went.

As soon as we started making our way through the calm waters of the bay, we were mesmerized by the seascape and the multiple timestamps, discernible by countless events that occurred in the history of the Bay of Kotor.

While cruising through the place further down the line, we saw many significant sites that embody the lifestyle of the fishermen and other locals from this area. After a while, we caught ourselves lost in thoughts about the chronicles from the past, and we enjoyed the mindful sea trip.

The interesting part of the tour was the game that was organized for our team, the so-called “Treasure Hunt” – a search for the Golden Rocks left by Fairy 478 years ago for our team to find it in various places around the bay. 🤣

We were separated in a few groups (everyone had their own color), and in order for our group to win, we needed to find more golden rocks that other groups. Our lovely Megi organized this game for us – and frankly, some ppl didn’t play fair, but that was the pirate spirit, I guess. Stealing is not nice. Thank you for coming to my Ted Talk. Kuki, this one goes to you.

Among golden rocks, there were soooo many other challenges along the way, we had to play the Macarena dance, lend things from other boats, play Titanic scenes (kiss a stranger – that was initially not part of the game but someone still did it for bonus points). Besides this, we had to all sorts quizzes along the way to find out where our treasure is.

We also swam in the beautiful Blue cave, which is known for its crystal clear water. The color of the water was just mesmerizing, varying through all shades of blue. Some of the team members also found it a convenient place to take a quick nap. (which coincidentally describes their productivity in the workplace as well (just kidding, our team is the best)). 😂

It was fun to see how team Coinis has once again shown how a great team-building contributed to a harmonious work environment. Cherish your colleagues and have fun! Although we ended up quite sunburned, we had a great time and took lots of cool pictures.

The Green team won the game – they collected 13 rocks. Bravo Green team. A few words about these guys, they are extra competitive and they put 200% of themselves in this game (If you can call it a game – Danilo had bruises from jumping on a wall to collect one rock). Big kudos for these guys and gals and their fierce spirit!

Later in the day, after having dinner, we organized a group meeting, where we discussed our biggest fails in life, followed by cool presentations.

As mentioned, the Green Team won the Gold Rock chase, so naturally, there was a reward. The team won a table football (table soccer) and their names will be engraved on the table as a “thank you” for the contribution. How cool right? Besides this, their Gold Rocks will haunt us in the office since they will be spread all around to remind us of their accomplishment.

The FuckUp night was a special thing for sure. As we said before, some of our team members shared their stories on some of their failures which taught them valuable lessons. Sharing them with all of us helped in realizing things in an easier way – for us not to make the same mistake, but get the lesson 🙂 So, thank you for that.

The next day we went to a beautiful place called Ivanova Korita to play paintball. We lashed out our stress at the team members who have been giving us a hard time at work. 😂 Shooting people is our favorite passive-aggressive way of solving workspace problems at Coinis. ❤️

Paintball was really fun and may I comment, quite painful. We felt like we were in a real-life battlefield, recreating the World Wars and the dramatic shooting scenes from the movies. All the PubG and CS matches we had got nothing on this, we tell ya.

After three games in a row, barely walking and tired, we went to our bus and continued our path towards Podgorica, but first – FOOD.

Went to get lunch, to make peace with the “enemies”. We ate like we haven’t seen food in months. 🤸‍♀️We went to a restaurant with Montenegrin national cuisine, Etno Selo Sv. Georgije which is located in Njeguši, near Lovćen mountain. If you want to try montenegrin food, this is the place to go to. Though it is a bit chillier, we recommend that you take a jacket.

Here are some cool photos:

In conclusion, the Coinis team-building trip was a success. Besides shooting each other in the face and falling over giant rocks while running from bullets, we really did grow closer as a team.
And even though we came back with bruises and cuts from the battlefield, now we are fresh and ready to take on new challenges at the Coinis office. 😎

Wait, do you have a website? Why don’t you try monetizing it via our Publisher Platform?

Are you interested in working in our fabulous company?

We welcome talented, proactive folks – so shoot. Apply for a job position at Coinis.

One of the most creative teammates, Kaja is always here to inspire us with interesting content and information gathered from the most reliable sources and experience.