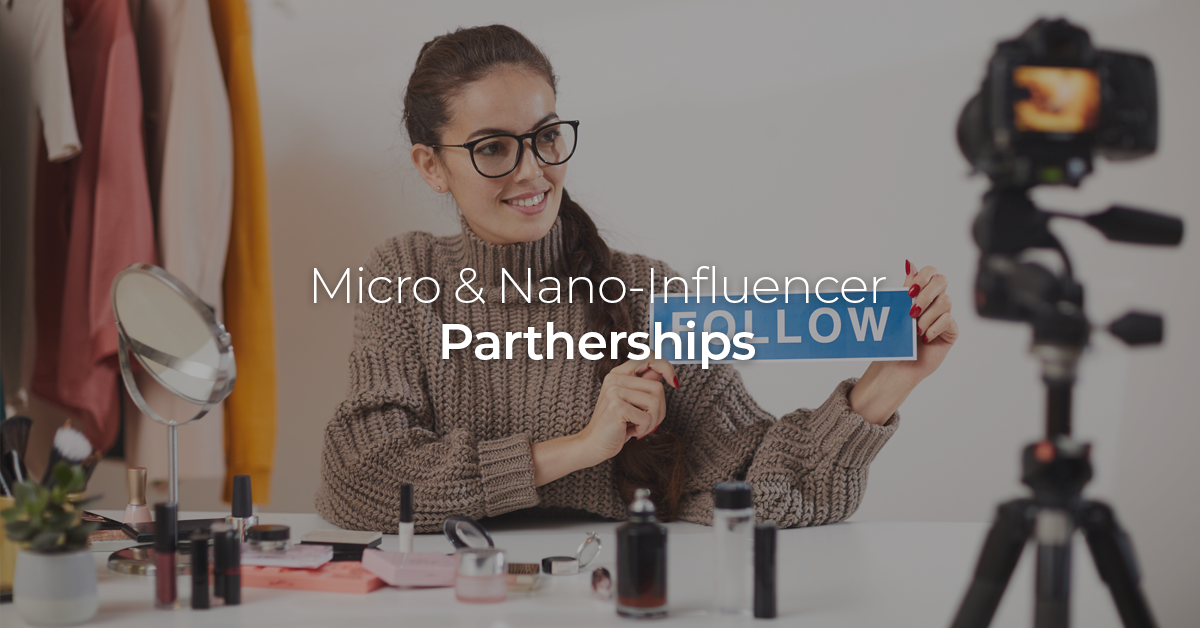 When it comes to influencer marketing, it seems logical to think that we should all be aiming for a post on a creator’s feed with hundreds of thousands of followers. But you would be surprised – investing in smaller influencers at scale, whether nano influencers (with 1,000 to 5,000 followers) or micro-influencers (under 10,000 followers), is increasingly being shown to provide more benefits for your budget than large influencer accounts.

As a result, it’s no wonder that many brands are looking to them to help them expand and develop their influencer marketing initiatives. In reality, nano and micro-influencers have far higher levels of connection and authenticity with their followers, which can lead to purchases. If this strong group of influencers isn’t on your radar, it’s time to think about it.

But What is Influencing? And What Does This Have To Do With Marketing?

The simplest way to convey what influencing is is to say “to influence.” Influencing is the act of shaping an audience’s thoughts about what products and services best suit their lifestyles, and then persuading them to try or use those same products and services. Influencing is a new-age form of ‘brand activation,’ with the exception that it heavily relies on individuals with a large social media following to publicly endorse products, services, and organizations in the hopes of humanizing brand names in the eyes of their audiences in order to stimulate brand awareness, product trial, or brand switching. Influencer marketing is the practice of promoting items through the endorsements and placement of products by important persons or organizations that are considered experts in their fields.

How to Find a Suitable Influencer?

It’s better to start small, with nano- or micro-influencers, and work your way up to the bigger social media stars while you’re new to influencer marketing. Smaller-scale influencers are often more important to your brand than macro-influencers because of their lower price points and higher conversion rates. Nano- and micro-influencers are the finest partners to have if your goal is to develop trust with your target audience and win more word-of-mouth recommendations.

You can find influencers to promote your company in a variety of methods, much like other types of influencers. Here are the most effective methods for finding micro and nano influencers, as tested by a number of marketers who have successfully executed influencer marketing programs.

There are different ways of finding influencers. Some of them are:

How to Approach Them on Social Media?

1. Keep in mind that this is a text message, not an email. Be friendly and personable. Pretend you’re having a face-to-face conversation with them.

2. Do not try to persuade them to buy your stuff. Instead, sell them on your company’s image. What values do you share with them? What about them made you think they’d be a good fit for your company?

3. Last but not least, do your homework. If you’re contacting someone via Instagram, have a peek at their profile to see if there’s anything with which you can connect. “We noticed that you have your own cookie recipe,” for example. Before starting the conversation about being an influencer, saying “That’s extremely creative!” could make all the difference.

What are the Benefits of Working with a Nano- and Micro-Influencer?

1. You’ll get more for your budget

To begin with, nano- and micro-influencers are extremely cost-effective. Their rates are far lower than those of users with larger followings. Macro- and mega-influencers typically charge exorbitant prices for branded collaborations, and while they might provide value, their rates are frequently too expensive for small enterprises. Nano- and micro-influencers, on the other hand, frequently do not charge anything for a post.

2. The engagement is great

While niche influencers cannot compete in terms of followers with their larger colleagues, companies should be more interested in interaction, which is where nano- and micro-influencers excel. Because engagement is becoming more important than reach and followers, metrics like commenting, liking, and sharing are vital to consider when dealing with influencers.

Because their communities are smaller and more interested in and focused/engaged with their material, nano- and micro-influencers often have a high average engagement rate, and because social media algorithms are typically not working against them.

3. Their following is loyal

Nano- and micro-influencers, on the whole, have a devoted and engaged following. Their following is still expanding, and it consists of people they’ve met, people who’ve followed them since the beginning, people who enjoy their content in general, and people in their personal network of friends and family.

4. They’re the best kind of influencers for starting a business from the ground up

Ground-up growth refers to a company’s goal of reaching as many people as possible by starting small and expanding within each sector. The best vessel for this is nano- and micro-influencers. They can help you increase brand awareness and exposure by allowing you to flood a market with your brand and goods.

5. A small influencer is accessible and approachable

Smaller influencers are also more accessible (through email, direct message, etc.), more willing to investigating out-of-the-box offers, and you can interact and create a stronger relationship with them because you’re speaking directly with them rather than a talent manager.

6. Traditional marketing and advertising are no longer effective.

Traditional marketing and advertising, particularly print marketing, is no longer the go-to strategy for raising brand awareness, boosting product sales, generating favorable PR, introducing a new brand/product/service, and so on…

If you want to hear more about working with mico and nano-influencers as a brand, here is a useful video showing what the whole process looks like. This youtube provided a complete a-z breakdown on how anyone can follow the blueprint explained in the video, with real examples provided (Source: The Ecom King – Youtube).

But what do the actual ads look like? Here is an example of the “Coldest” water bottle brand:

It’s better to start small, with nano- or micro-influencers, and work your way up to the bigger social media stars while you’re new to influencer marketing. Smaller-scale influencers are often more important to your brand than macro-influencers because of their lower price points and higher conversion rates. Nano- and micro-influencers are the finest partners to have if your goal is to develop trust with your target audience and win more word-of-mouth recommendations.

One of the most creative teammates, Kaja is always here to inspire us with interesting content and information gathered from the most reliable sources and experience.